Who is CoPilot? How it Works Happy Clients CoPilot for Dealers Log In

CoPilot’s Return to Normal Index shows the differential between what any used car price would have been today if not for the extraordinary dynamics of the past two years, versus how much it is actually worth now, at retail. As it tracks this differential over time, the Return to Normal Index provides the only real-time barometer of the used car market’s recovery, as well as how close individual vehicle segments, brands, and age brackets are to returning to normal pricing levels. 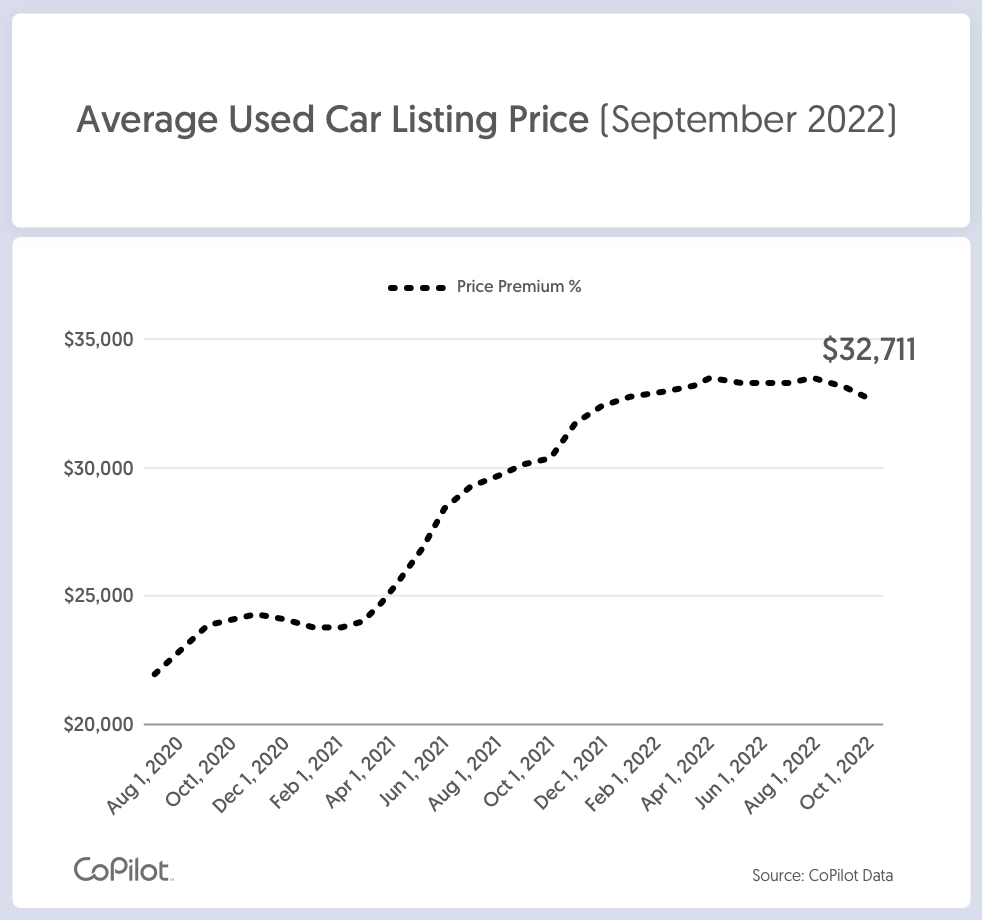 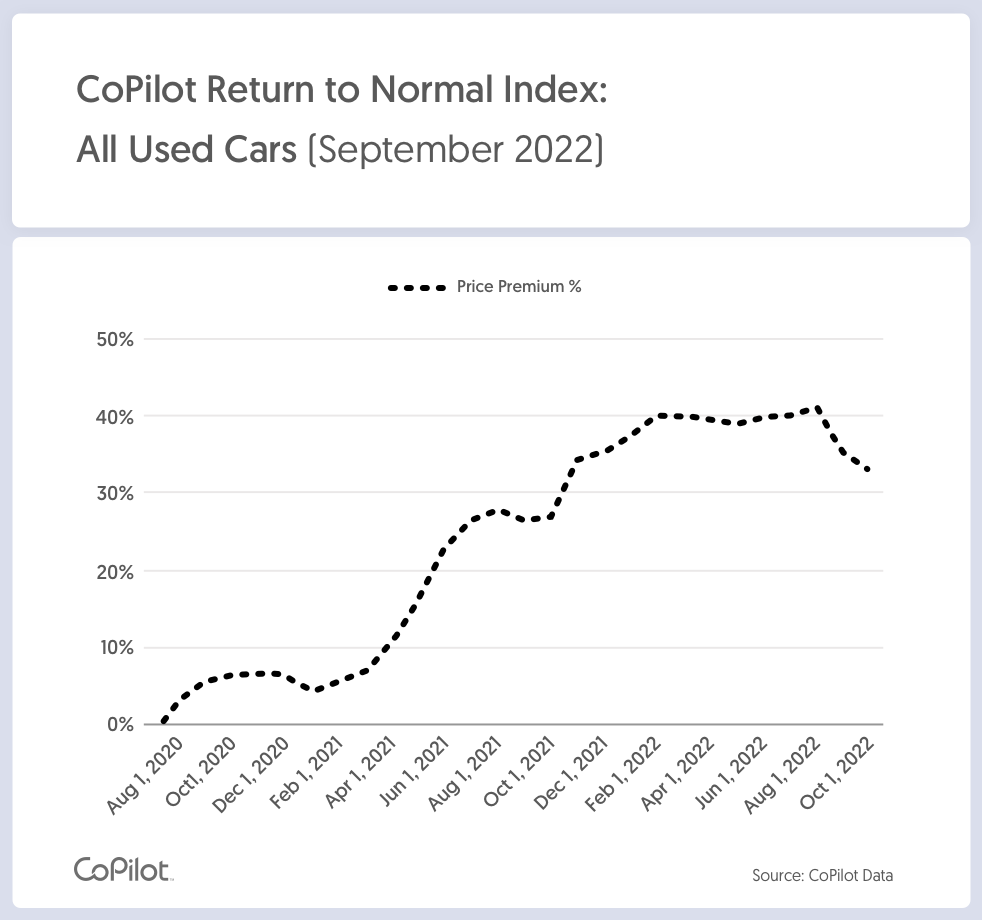 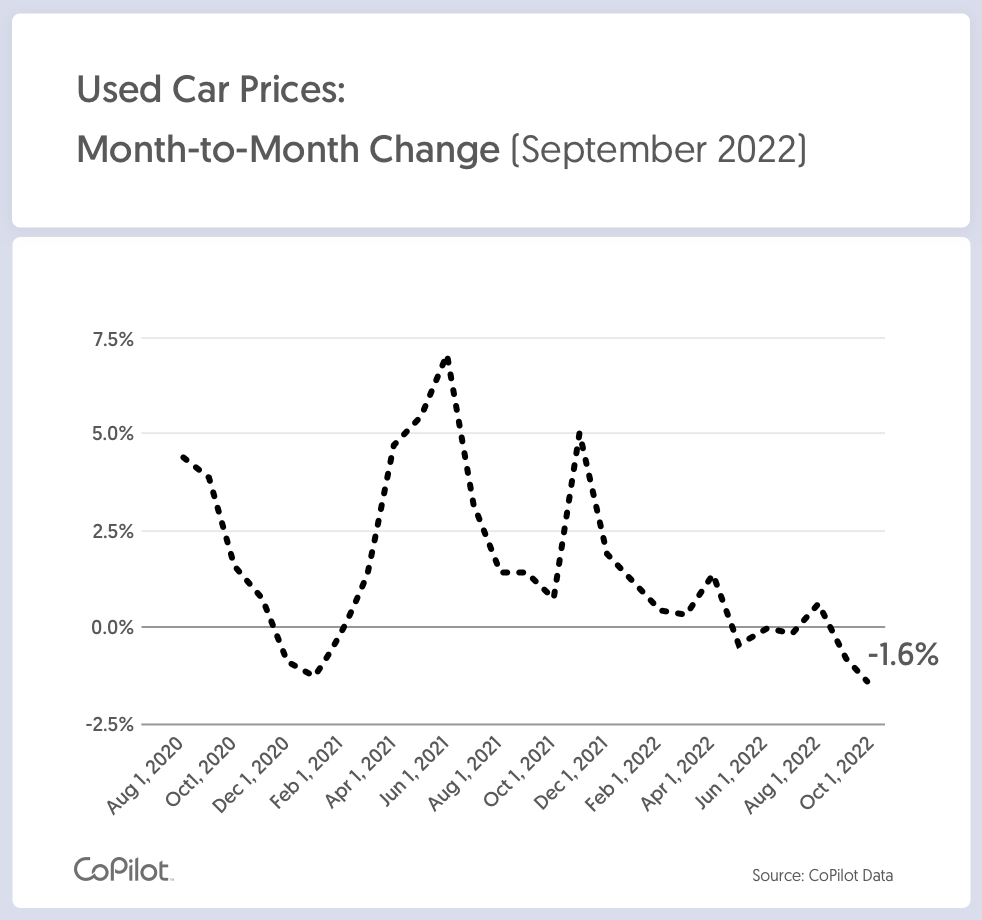 Within the overall market, newer used car prices were the last to peak, but are now dropping most quickly, accelerating their fall in September. Meanwhile, the listing price of older models, which has been falling for longer, dropped less significantly in September. 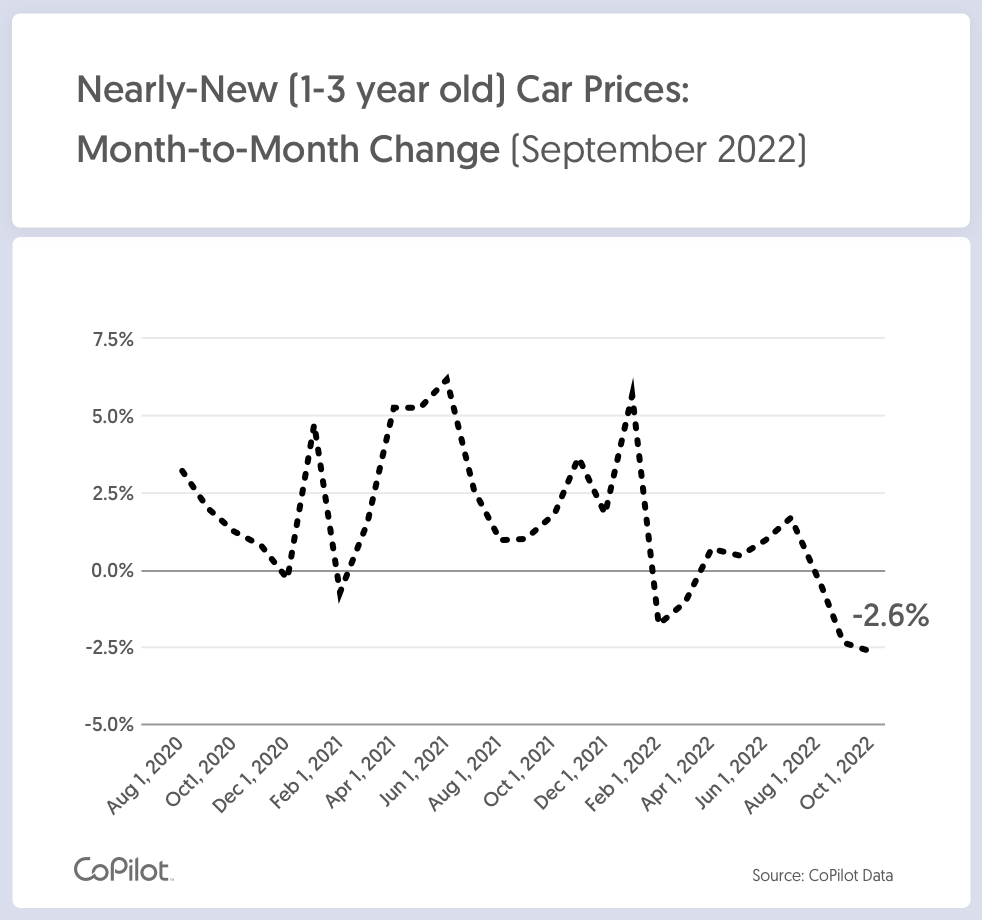 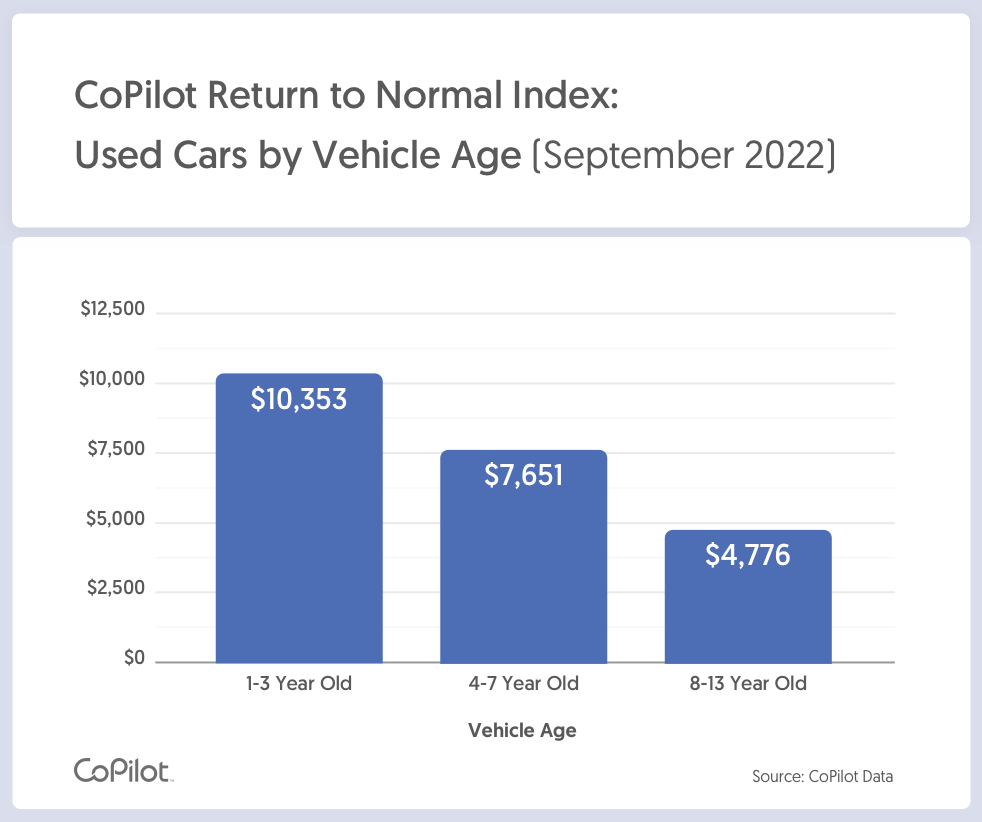 PRICE PREMIUM BY TYPE OF VEHICLE

With gas prices still nearly 20% higher than they were last year, used SUVs and trucks continue to trend downward in price. For the fifth consecutive month, both segments remain the closest to returning to normal pricing levels. 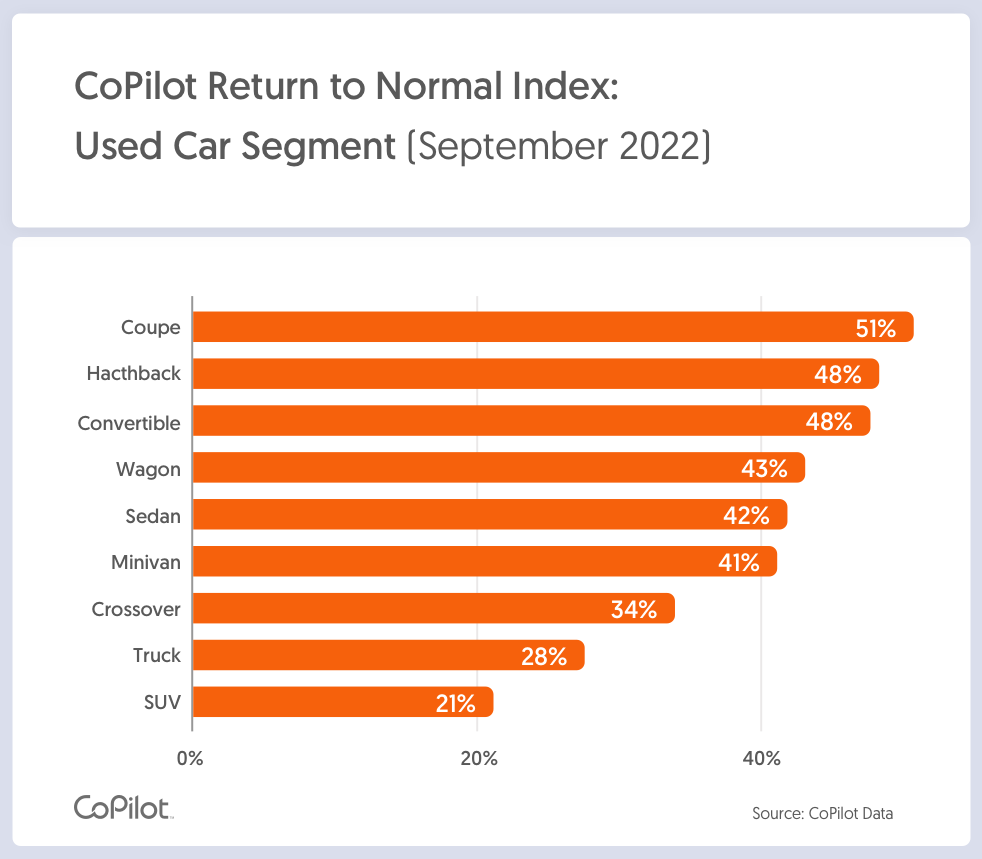 Of the 47 brands analyzed by CoPilot, only three small brands did not see their average price drop between July to September 2022 (Smart, Mini, and Hummer). Every brand saw 1-3 year old car prices drop from July to September, with Tesla dropping the most of any significant brand – by a staggering 9%. Among the largest brands, foreign cars dropped less than their domestic counterparts. 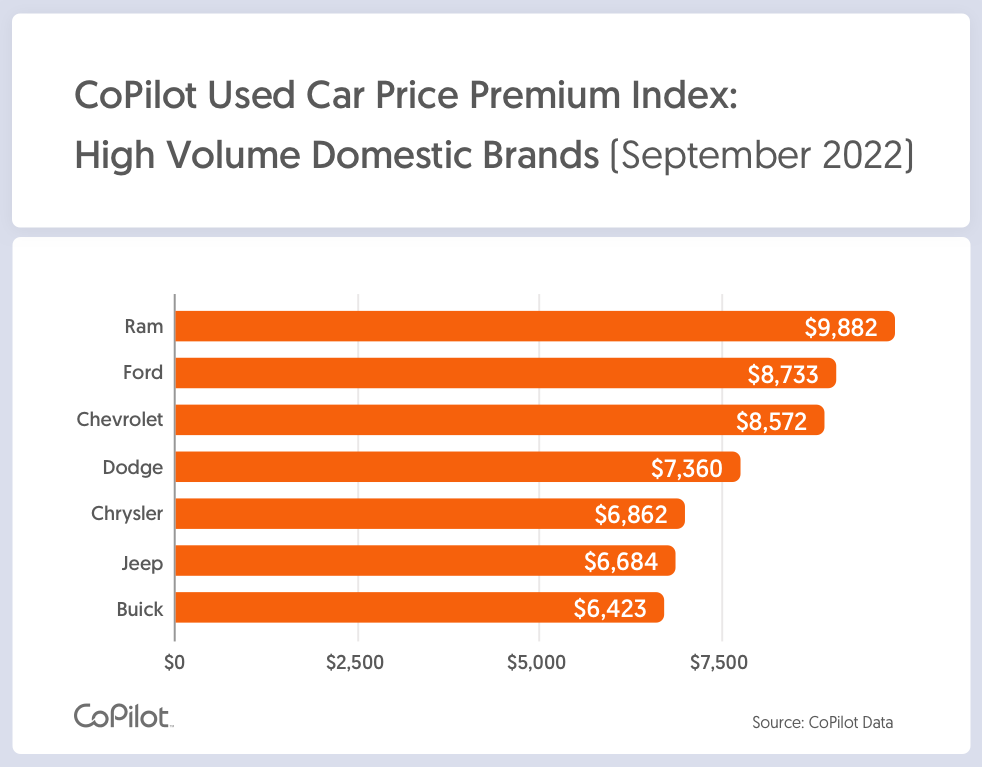 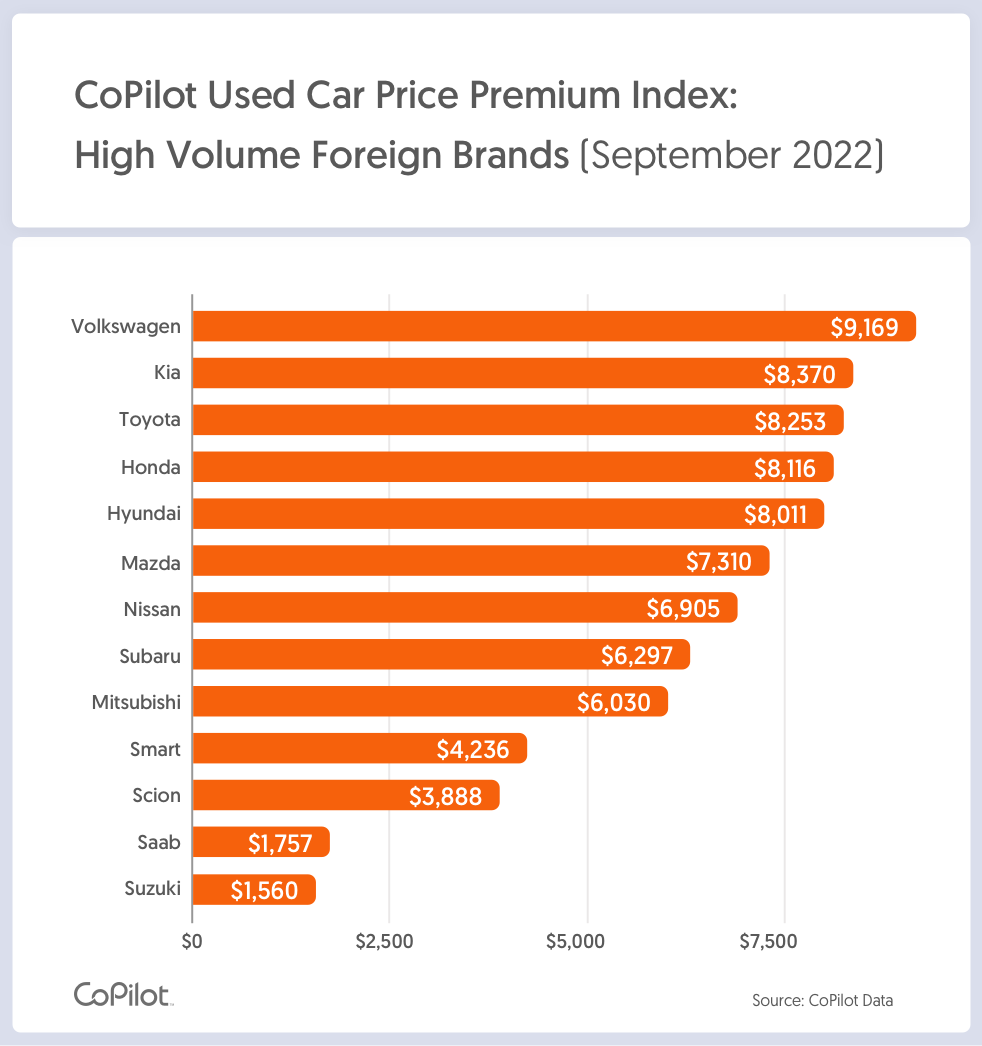 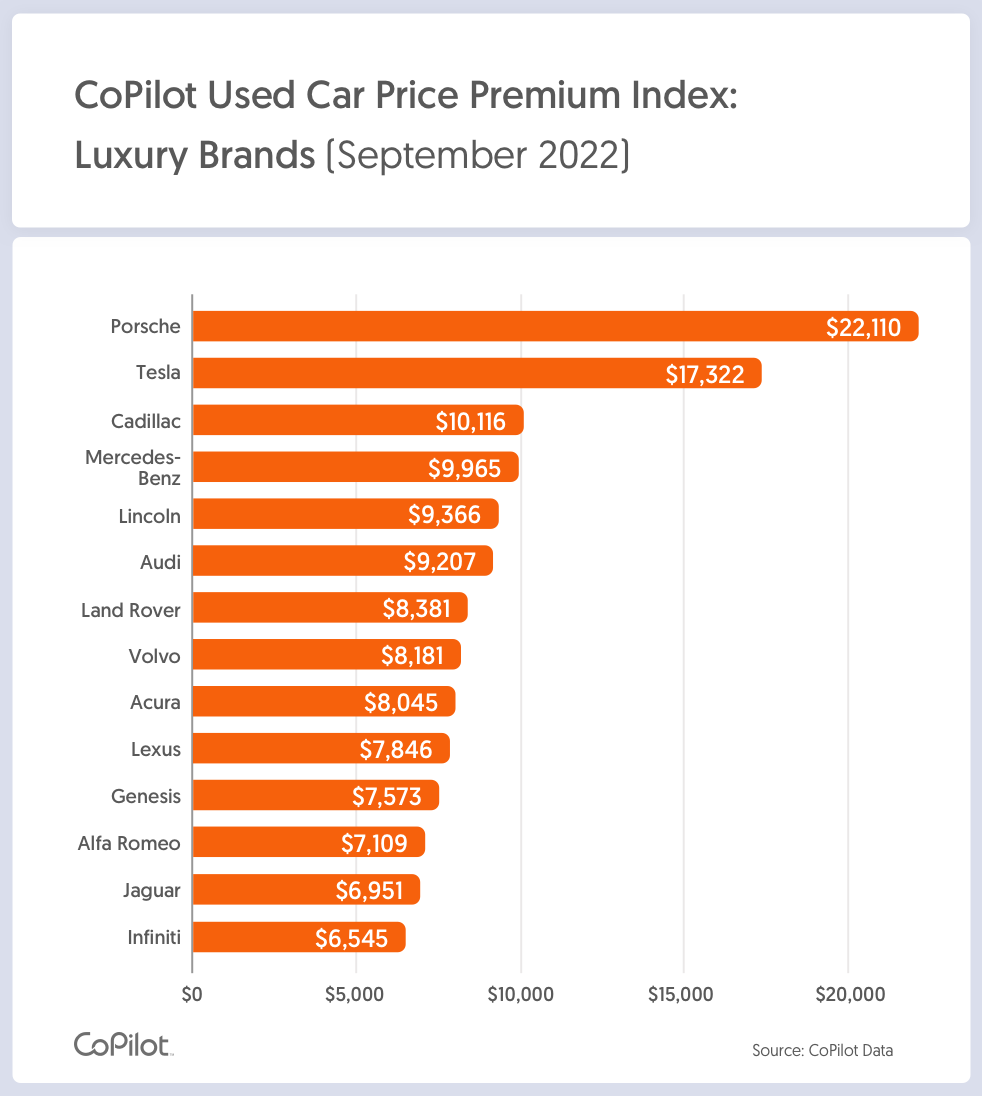 Used car prices increased by 50% from 2020 to 2022. Older vehicle prices began to peak and soften in Q1 2022, but price drops were not sustained across the market. After peaking in July, however, overall used car prices first began to decline more seriously in August, and accelerated their fall in September, a trend seen across almost all vehicle age brackets, segments, fuel types, and brands. As consumers grapple with the triple-whammy of soaring inflation, high gas prices, and multiple interest rate hikes, their willingness to pay record-high prices has significantly receded. The likelihood of even higher interest rates to come, driving up loan payments on already inflated car prices – plus the prospect of economic recession – is making many buyers even more cautious. As a result, dealers are being forced to finally lower their prices, to hit sales targets and to offload inventory before it depreciates further.

CoPilot’s advice to retail car buyers is to be patient if you can. After two years of a seller’s market, the power is starting to shift in favor of the buyer. If you must buy a car now, you have more negotiating leverage than at any time for many months. However, with prices falling by 2% per month, wait if you can, monitor the market vigilantly, and negotiate hard when the time comes to buy.

While prices have started to fall, we expect them to fall further and faster, offsetting the pace of interest rate increases in the next three to six months, and accelerating even further when more new car supply eventually re-enters the market, as expected in early 2023. Additionally, as used cars are clearly falling off their peak pricing levels, now is the time for those with a used car to sell or trade in to make their move and lock in a great price, before the market corrects more significantly.

The Return to Normal Index is drawn from data collected by leading car shopping app CoPilot. CoPilot’s data and proprietary methodology track the online inventory of virtually every dealer in the country, every day, offering real-time analysis around car prices, inventory, and sales. This October report covers data through September 30, 2022. Data and methodology have been refined in this report, for increased sensitivity to market fluctuations. Data may adjust in future, due to changes in methodology and as additional data sources are integrated.

CoPilot provides free pricing tools for consumers. Price Pulse makes it easy for car shoppers to check the current market value and Price Premium for any car, track price changes, and compare years and models to choose the right car and know when to buy. For car owners and sellers, Price Pulse calculates the real-time value of their car, using the same data only dealers used to have, allowing consumers to track how much their vehicle has appreciated, so they can decide whether and when to sell, or negotiate the best deal at trade-in or lease-end. For media publishers, CoPilot offers embeddable data tools, allowing journalists and bloggers to integrate interactive charts within their web content, apps, or newsletters, powered by CoPilot’s unique data and analytics.