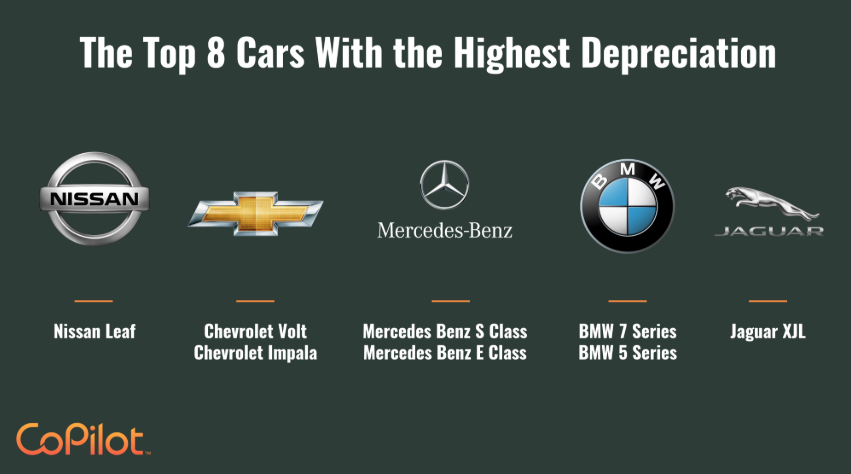 Three years ago, you bought a nice new car, but now you’re thinking it’s time for a change. You’ve been kind to the car; it’s in excellent condition, and it’s still practically new.

Then you look up your trade-in value and see it’s worth less than half of what you paid 3 years ago. How is this possible?

Brand-new cars depreciate quickly, with most models losing up to 20% of their value the first year alone. After that, most cars continue to depreciate by 15-25% per year, but some cars lose value much more quickly than others.

If you only know one thing about car depreciation, know this:

It’s a bad idea to trade in a car that’s less than 3 years old, but a great idea to buy a ‘nearly-new’ car instead of buying new.

Depreciation is only a bad thing if it’s your car that’s depreciating. Since newer cars depreciate extremely rapidly, the cost per mile you’ll pay to drive a new car is always higher than if you buy a nearly-new car.

Finding the sweet spot between value and reliability

The main reason people buy new cars is for a feeling of reliability and security. However, that feeling of security typically comes at a very high cost - it usually costs about 3 times as much per mile to drive a new car as it does to drive a nearly-new car.

This means that buying a nearly-new, off-lease car with low mileage and CPO coverage is the best balance between value and reliability. In exchange for 10-15% of the car’s overall lifespan, you can easily save 50% or more vs. the car’s original MSRP by buying nearly-new.

To learn more about the fastest-depreciating new cars, keep reading. To see nearly-new cars in your area at significant discounts vs. MRSP, check out CoPilot Compare, the search engine for nearly-new cars.

NO SPONSORED OR PROMOTED LISTINGS, EVER

CoPilot doesn’t work with dealerships, and we don’t make a penny when a car is sold through our app. This means no ‘sponsored’ or ‘promoted’ posts - just the most accurate information on each vehicle. Learn more about CoPilot and see how we manage to keep the lights on.

The fastest depreciating cars on the market today

The Nissan Leaf Electric Hatchback is one of the biggest depreciators of them all due to rapidly-aging EV technology.

Electric vehicles are great for fuel efficiency, but they tend to evolve quickly from a technological standpoint. That means that the two-year-old Nissan Leaf you’ve been taking fantastic care of is quickly becoming obsolete.

The advancement of EV technology is a significant factor that contributes towards the Leaf’s drastic depreciation, with other models offering much longer ranges and faster charges.

On top of that rather substantial factor, there is a severe lack of public charging infrastructure that makes it difficult to use the Leaf outside of cities. That also remains a big problem that contributes to their value depreciating.

However, if you’re looking for a used EV at a great price, picking up a last-generation Leaf might be the way to go. You might not have the range and charging times of some of the newer EV models, but you’ll pay a fraction of the cost.

If you’re a savvy car shopper, you know that buying a ‘nearly new’ car is the best value for your money. CoPilot Compare is the search engine for nearly-new cars.

While the Chevrolet Volt made a significant impact on the automotive industry when it first came out, it’s now an old concept.

The Chevy Volt is another electric car that fell victim to rapidly-developing EV technology. If you own a Chevy Volt, you’ve likely seen the resale value plummet with every passing year.

The depreciation rate is even faster after five years of ownership, so if you’re still hanging on to your Volt you might want to upgrade soon.

The good news for buyers? The Chevy Volt is still a great choice for an entry-level EV, and picking up a lightly-used Volt at a huge discount might be the way to go.

The Mercedes Benz S Class is the German automaker’s flagship sedan. You may think that because of the value Mercedes places on these vehicles, it would be safe from a high depreciation rate. You would be wrong.

So why does the Mercedes Benz S Class depreciate so rapidly? For the same reasons most luxury cars depreciate faster. They’re commonly leased, leading to a large supply of off-lease, three-year-old Mercedes-Benz S Class models. Also, a new S Class costs about $100,000, so losing 20% to depreciation in the first year of ownership means losing a whopping 20 grand of value.

The flip side is that you can frequently pick up a minty S-class with 50k miles on the odometer for less than $50k. Let someone else pay a hundred grand to drive 50,000 miles, then pick one up cheap and drive it for another 250,000 miles.

When you look at depreciating cars, the BMW 7 Series is always a part of the conversation. That’s because it has the dubious distinction of being the first vehicle to break the 70% depreciation barrier after five years of ownership.

BMW Series 7 depreciate even faster than their Mercedes Benz rivals, which is terrible news for anyone that bought them new and great news for anyone buying them used. Picking up a lightly-used 7-series can set you back as little as $28k, a whopping 65 grand (or 70%) less than when it was new.

The BMW 5 Series and Mercedes Benz E Class tend to compete for the same buyers. They’re also both on this list of fastest-depreciating cars.

This BMW mid-sedan loses value at a much faster rate than average in the US, making it a hazardous buy when new. You can pick up a lightly-used 5-series in the low $20k range, about a third of what they cost new.

The Mercedes Benz E Class is expensive when new and costly to maintain, which is the surest recipe for fast depreciation.

It’s a luxury car, so it suffers a similar fate to others in its class. These vehicles are leased a lot, so you see a massive influx of three-year-old versions of this car placed back on the market.

That overflow of off-lease vehicles at great prices kills the market value, making it a much better decision to buy a used E class than a new one. You can pick up a nearly-new E Class with under 30,000 miles on the odometer for half of what you’d pay for a new one.

Much like the Mercedes Benz E Class, the Jaguar XJL is a luxury vehicle that depreciates quickly because of a large percentage of leases.

Because it is leased so much, there is a surplus of three-year-old, off-lease Jaguar XJLs on the market, which lowers the demand for older models and kills the resale price and trade-in value. While they can be a little bit more difficult to find, you can frequently find nearly-new Jaguars at 40-50% off MSRP.

Although the Impala is a full-size sedan and an outlier on the depreciation list, it saw a whopping 40% decrease in value for 2019 models this year, so it’s earned its place on this list.

Chevy Impalas are used as rental cars, which is another huge red flag when it comes to the depreciation of value. There is currently an oversupply of these vehicles coming out of fleets.

Finding a car to buy is easy, but feeling confident that you got the best deal is hard. CoPilot shows you if there are similar vehicles nearby at a lower price, so you’re always sure you’re getting the best deal. The CoPilot app is the smartest way to buy a car. 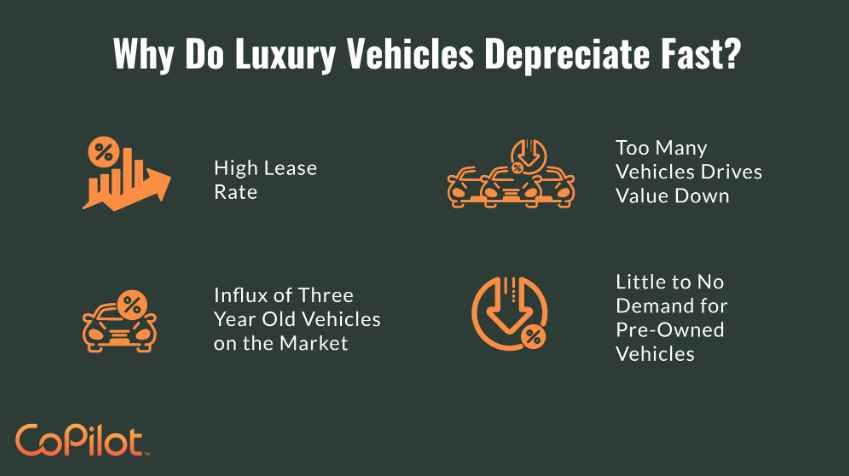 There are a few main reasons for this:

The majority of luxury sales are leased, which means they are returned within a few years. Because of that, there is a constant stream of three-year-old vehicles hitting the used car market. That, in turn, drives down costs substantially.

They also tend to be more expensive to repair and maintain, which makes ownership less attractive to cost-conscious buyers.

Finally, new luxury cars are a status symbol, and there’s not as much value in having ‘last year’s fashion’, leading to high turnover rates for luxury cars. If you’re not trying to keep up pretenses, this means you can get a nearly-new car at significant savings vs. MSRP.

Buying a used, CPO luxury car is one of the smartest buys you can make. You can easily pick up a three-year-old luxury sedan for about half of what you’d pay new. Check out this list of the best used luxury cars on the market to find the best deals.

For now, yes. Electric vehicle technology is developing quickly and we’re in the awkward adolescent stage, so a lot of EV models are getting left behind as bygone technological curiosities of a forgotten era. Those of you that bought a Zune back in 2006 probably know the feeling.

Unfortunately, this means that most electric vehicles depreciate more quickly than non-EVs. This trend is likely to continue until EV technology plateaus, after which the rewards for having the newest technology will be smaller and smaller.

Does this make used electric vehicles an unwise purchase? Not at all, provided that you know what you’re getting into. If you’re looking for a serviceable EV at a great price, a used Leaf or Volt might be a great idea. Just know that continued depreciation will make it difficult to sell or trade later, so it’s a ‘ride or die’ sort of arrangement. Your best trade-in value will quickly be at the recycling yard.

Let depreciation work in your favor

Depreciation only sucks if it’s your car that’s depreciating. If you time your purchase well, you can pick up a like-new car at a significant discount vs. MSRP, letting depreciation work in your favor.

It’s important to remember that depreciation only affects the value of the car, not the car itself - that luxury sedan is just as luxurious as it was two years ago, but now it costs half as much. For us, that’s pretty easy math, and why we’re huge advocates of buying nearly-new cars instead of new.

Check out our new CoPilot Compare tool to see all of the nearly-new vehicle listings in your area.